What is Sciatica or Sciatic Pain?

Sciatica is the term used to describe pain which occurs in the buttocks, legs and/or feet. It is a consequence of there being compression or irritation of the sciatic nerve. The sciatic nerve is the longest nerve in the body and runs from the lower back and buttock to the feet. Sciatica symptoms and the duration of symptoms vary for each individual as it is dependent on its cause. Sciatica may also be referred to as a trapped nerve in the hip or leg.

What are the Signs and Symptoms of Sciatica?

Signs and symptoms of sciatica may vary between each individual, this is due to there being many different causes of sciatica pain. Sciatic symptoms may come and go or they may be constant for a prolonged period of time.

The most common symptoms of sciatica are:

Pain – Commonly sciatic pain is described as a burning, shooting or stabbing type pain that can occur in the thigh, leg and/or foot. It can be constant or intermittent and can vary according to postural changes. Activities such as bending forward may aggravate the pain.

The location of pain depends on which part of the sciatic nerve is compressed or irritated. The back of the thigh and leg are commonly affected. Other areas of the lower extremity that can be affected by sciatic pain are:

Altered Sensation – Tingling such as a pins & needles type feeling and numbness are commonly felt in the back of the leg.

Weakness – Weakness in the leg and foot is a common symptom. This may cause a feeling of heaviness in the leg or foot making walking or lifting your foot off the ground feel difficult.

You may find the pain gets worse when you:

Sit For a Long Time

Walk For a Extended Amount of Time

Usually these symptoms occur in one leg. If you are getting symptoms in both of your legs, it is recommended that you should consult your GP.

What are Common Causes of Sciatica?

The main cause of sciatica is due to damage to the intervertebral disc in the low back (lumbar region).

Thirty three spinal bones known as vertebrae are stacked on top of each other to form the human spine. Seven of the vertebrae make up the cervical spine (neck), 12 make up the thoracic spine (the middle back), 5 make up the lumbar spine (the lower back) , 5 make up the  sacrum and 4 make up the coccyx . Nerves run through the whole length of the spine. They connect the brain to each part of the body enabling messages to be sent and received, enabling you to move and feel things. 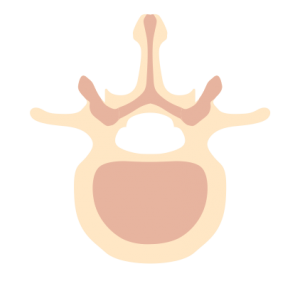 Intervertebral discs (IVD) are found in between each vertebrae. They act as a cushion, aiding (along with muscles & ligaments) in holding 24 of the 33 vertebrae together (the scarum and cocycx bones are fused and therefore do not have IVD’s). The IVD’s prevent the vertebrae from rubbing together and consist of a gel filled inner layer (known as the nucleus pulposus) surrounded by a hard fibrous outer layer.

Sometimes a person / patient can strain or injure their discs which can cause part of the gel filled nucleus to herniate out of the fibrous outer casing. This is known as a prolapsed disc, herniated disc or a slipped disc. When the disc herniation occurs in the lower back it may compress onto your sciatic nerve causing symptoms into the thigh, leg, buttock and/ or foot.

There are many causes of disc herniation, below are a couple of common examples:

There are other, less common causes of sciatica:

How is Sciatica Diagnosed?

In order for sciatica to be diagnosed, you don’t always have to see your general practitioner (GP) . Osteopaths, physiotherapists and chiropractors are forms of physical therapist that have the ability to diagnose the causes of sciatic pain and potential treatment options. Your therapist will perform a consultation which involves taking a case history. In this history, the practitioner will ask you about the symptoms you have experienced and potentially still are experiencing. They will also complete a physical examination. Information obtained via this examination and case history will assist the practitioner in making a diagnosis.

Whilst your practitioner is taking case history they may ask you questions such as;

During the assessment section of the appointment, a series of tests may be carried out by your practitioner. This may include; an assessment of your posture, reflex tests, muscular strength tests and nerve stretch tests.

In some cases imaging MRI’s or X-rays may be required in order to further understand the cause of nerve irritation.

There are many options when it comes to treating sciatic pain. The treatment for sciatica and length of treatment will be dictated by the origin and cause of the sciatic pain.

Osteopathy: visiting an Osteopath or physiotherapist can help with sciatica relief. A variety of hands on techniques can be used with the combined aim of:

Information regarding pain management techniques, hot and cold therapy and advice about returning to activity can all be provided by our osteopaths and physiotherapists.

Your Osteopath may additionally prescribe you with a range of exercises with the aim of increasing the strength core muscles and lower back as well as improving your posture. These exercise programmes will be designed by our practitioners to ensure they are controlled and progressive. Your program will be tailored to your individual needs and based upon your specific symptoms.  In order to prevent the return of sciatic pain, it is important that the program is adhered. Continue reading to see a range of simple exercises to help manage your sciatic pain.

Medication: Based upon the severity of your pain, you may wish to visit your GP. Your general practitioner can prescribe oral medications to aimed at relieving your symptoms:

Epidural Steroid Injections (ESI): Steroid injections can by recommended by your GP to assist with pain management. This technique requires an injection of corticosteroid and a local anaesthetic into the epidural space (space around your spinal cord). Through reducing the inflammatory response around the sciatic nerve, ESI’s can provide temporary relief from symptoms of sciatica.

Surgical options include:
Sometimes people with sciatic nerve pain may need surgery to their spine. This is a very small percentage of people and is very rare. Any surgical options should be discussed in detail with your GP or consultant. The two main surgeries for sciatic nerve compression are a discectomy or laminectomy. The main aim of surgery is to decompress the affected sciatic nerve.

Visit the NHS help website to find out more information about the different surgeries available for sciatic nerve compression.

How Long Does Sciatica Last?

The prognosis for sciatica is dependant on the cause of the nerve compression. For some patients symptoms may occur for 6-8 weeks, for others it may be a more long term prolonged pain. Suffering with sciatic symptoms? Book in for a free 15 minute consultation with one of our osteopaths to see how they can help you and your sciatic pain.

Can Sciatica be Prevented?

What are the Best Exercises  for Sciatic Pain?

Maintaining movement is essential for people suffering with sciatic pain. Exercise and movement helps with; aiding blood flow around the body, strengthens muscles and prevents joints and ligaments from stiffening up.

Below are a couple of simple exercises to do if you are experiencing sciatic pain*:

Move into a lying position with your back on the floor. Ensure your knees bent. Inhale deeply before exhaling and pushing your lower back into the floor slowly. It will be noticeable that your pelvis tilts when completing this movement. Take another breath in before returning to the neutral position. Following this, raise your back off of the floor. Whilst doing this, be sure to arch your back, and tilt your pelvis in the opposing direction. Finally, bring your body back to its original neutral position. Repeat this exercise. Learning this exercise will provide you with an important foundation to learn advanced exercises. Book in a free sciatica consultation today! 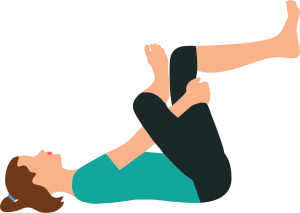 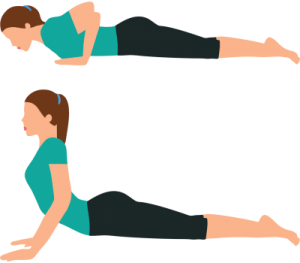 Lie on your stomach with your hands placed underneath your shoulders. Inhale and gently push up with your arms, maintaining a forward gaze. Gradually lift your chest off the floor. Hold for around 30 seconds.

Make sure your pelvis is still contacting the ground and  your buttock muscles relaxed. Take two to three slow breaths and then slowly return your torso to the floor and repeat. Be mindful to not push up too far and complete the exercises within a pain free range.

* It is recommended to get the OK from your Osteopath, physical therapist or GP before trying out any of these exercises.

Do I need to go to the GP or visit my local hospital?

If you are experiencing any of the following symptoms, The Sciatica NHS website suggests that you should go to your GP.

If you a experiencing any of these could be symptoms, you may be at risk of a more serious back problem.  In order to seek further medical advice on how to treat your symptoms, visit your local GP or call 111.