What is the Fitzpatrick scale? 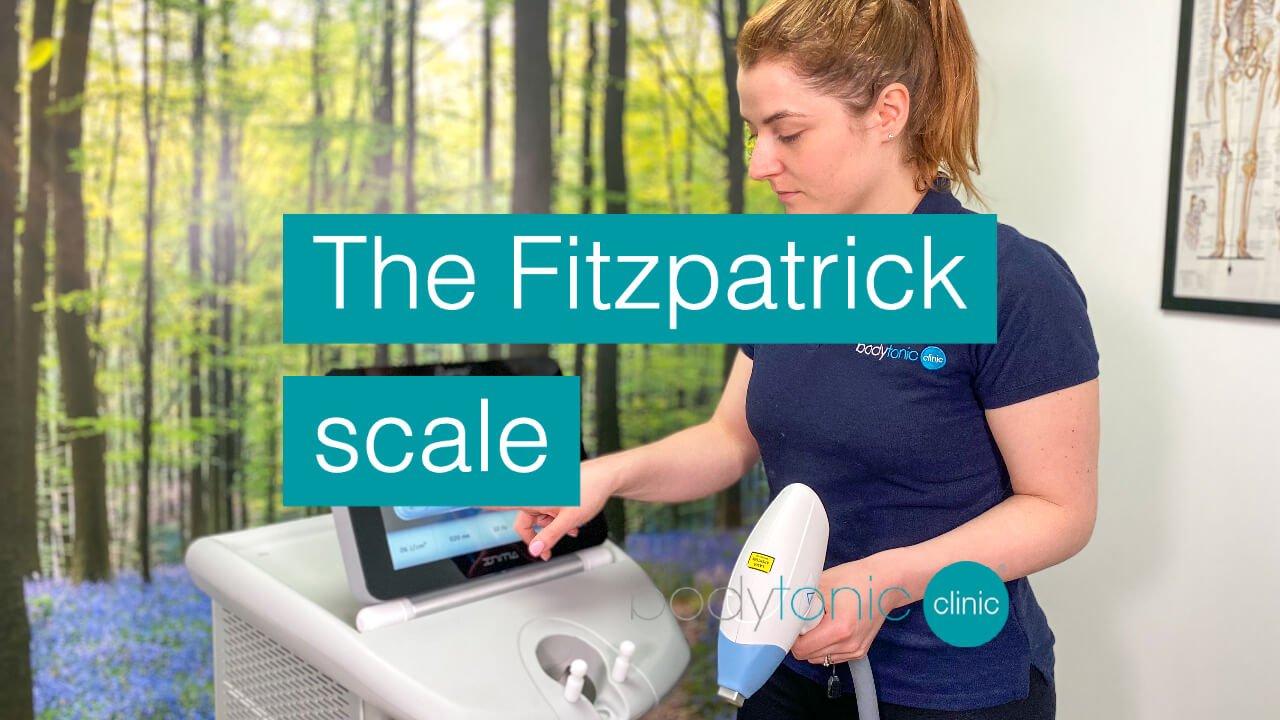 The Fitzpatrick scale was developed in 1975 by Dermatologist Thomas B Fitzpatrick. It is a numerical scale which can be used to determine human skin colour by the amount of pigment and the way the skin responds to ultraviolet light. Such information is extremely useful in knowing the amount of time certain skins can withstand the sunlight; this helps determine their predisposition to skin damage and ultimately cancer. It is also extremely useful in working out early development of pigmentation disorders, determining the level of SPF required in individuals, the levels at which we use light based laser equipment in clinics and even help us choose makeup. Knowing your levels are a useful tool for skin protection.

Why is the Fitzpatrick scale important when having Laser Hair Removal treatment?

The Fitzpatrick scale can serve as a point of reference to gauge a person’s tolerance for different levels of sun and light exposure. Similarly to sunlight, laser hair removal machines use light and heat, which both have a direct effect on skin. This effect is partly why laser hair removal is regarded as a more long term hair removal treatment, as opposed to shaving or waxing, due to the laser, much like sunlight, being reactive with pigment. Melanin is a pigment found in hair, skin, and the iris of the eye. Melanin darkens a person’s skin, hair, and eyes, making them more likely to tan rather than burn. Laser hair removal machines can differentiate between hair and skin pigment by utilising the Fitzpatrick scale to modify its settings, and therefore the wavelength of light energy emitted from the machine. Contrasts between skin and hair allow the machine to direct itself to the hair follicle by focusing on the darker pigment, which for the majority of people, is the pigment found in your hair. Once the light reaches the shaft of the hair, it is converted into heat energy, which damages the surrounding cells, causing a stunt or stop in hair production. Adapting laser hair removal treatment to your skin and hair type is essential for the safest and most reliable result.

Using light lasers for aesthetic hair removal can provide 80% – 90% hair reduction, allowing patients to save money, whilst also achieving much better results due to how long lasting the treatments can be. Laser hair removal removes a large portion of time that many of us spend on shaving and waxing, with results that can last for years rather than days or weeks. At bodytonic clinic, we strive to exceed our clients’ expectations, so we use cutting-edge technology to meet all of your beauty needs. New laser hair removal machines, such as the INITIA diode laser machine used at bodytonic clinic, have been developed to use advanced technology, specifically designed to perform effective hair removal treatment for all skin types on the Fitzpatrick scale.

What are the six different skin types?

Although there are many more skin tones, there are six Fitzpatrick skin types. In general, everyone will fall into one of the following categories:

In your first Laser Hair Removal Appointment at bodytonic clinic your expertly trained beauty therapist will conduct a FREE patch test and consultation. It is important to take a thorough case history during this appointment. There will be questions regarding your lifestyle, medical history and sun exposure, along with questions about your skin and hair. These questions allow our practitioners to get an insight into where you are on the Fitzpatrick scale, how laser hair removal will affect your skin and hair, as well as how to make laser hair removal more effective for you with our medical grade machine. Your therapist will be able to advise you on how the treatment works, how many sessions you may need and how frequently you should have a session.

Following this consultation, the patch test will begin by marking out a 10 x 5cm section on the area being treated and the therapist will use the laser over this section. If your skin does not suffer any negative reaction after your patch test, you can be booked in for your first treatment session the following week. Booking appointments in advance and spacing them out six weeks apart ensures the best results. The number of sessions needed varies with each client. It is determined by a variety of different factors, including skin and hair type. This is why the Fizpatrick scale is so important, as it allows for us to tailor the treatment to you, your skin and your hair. It is recommended that each area receives a series of treatments, usually between six and twelve.

Your beauty therapist will always inform you of ways to look after your skin after hair removal as skin care is effective no matter where you are on the Fitzpatrick scale. Firstly, use SPF! The Fitzpatrick scale should not be used as a substitute for getting a professional opinion because it is intended to provide general rather than individual advice. People of all skin tones are advised to use sunscreen (with an SPF of 30 or above), ideally daily, even though those with fair skin are more likely to develop malignancies. People with darker skin, whether they are Africans, Latinos, Middle Easterners, or Asians, should all wear sunscreen. We also recommend shaving between treatments and avoiding all other types of hair removal. Hairs that have been shaved too far in advance will be too long, and the laser will have difficulty hitting the follicle, while hairs that have been shaved too soon after the treatment can cause more irritation, since your skin is still healing so wait at least 24 hours after your session to shave the treated area.

In the 24 hours after your session, we recommend wearing loose clothing to avoid irritation. Your skin is still healing at this time, try using aloe vera gel to help soothe your skin. Make sure to keep the treated area out of direct sunlight whilst avoiding heat inducing exercise, taking hot baths and saunas. These activities can cause friction and sweat which may lead to the possibility of blisters and rashes occurring due to excessive skin irritation. Maintain a cool and comfortable environment for your skin for at least 48 hours after your laser hair removal treatment. Moreover, avoid applying any kind of fake tan or makeup to the treated area, as your hair follicles will be sensitive after treatment due to the damage that incurs on the hair shaft and surrounding cells.

Full Arm OR Half Leg

Lip, Chin & Side of face